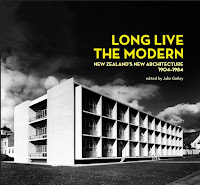 Buildings to hang on to
New Zealand Herald, Saturday Oct 18, 2008 By Bernard Orsman
Some of New Zealand's ugliest buildings and projects are praised in a book on modern architecture, including Auckland's first motorways, the Civic Building in Aotea Centre and Bulls' concrete water tower.
Dr Julia Gatley has written Long Live the Modern: New Zealand's New Architecture 1904-1984 to raise public awareness and appreciation of modern architecture to be recognised as heritage.
"I don't know why the public think it [the Civic Building] is ugly," said the University of Auckland architecture lecturer.
The Auckland City Council administration building, designed in the 1950s and the city's tallest building at 19 storeys when it opened in 1966, was a beautifully proportioned, slender building that encapsulated modernism, she said.
Dr Gatley is equally sure about the place of Auckland's first motorways, designed and built in the 1950s, within the realm of engineering heritage.
"Both the Southern Motorway and Auckland Harbour Bridge opened up big expanses of land for the development of Auckland and were filled with optimism."

Read the full report in the NZ Herald online.

Posted by Beattie's Book Blog at 8:20 am