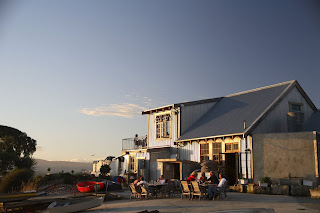 Fleurs Place is a restaurant, café and bar right on the waterfront at the old jetty in the sleepy fishing village of Moeraki on New Zealand’s South Island coast north of Dunedin.
It was built in 2002, on an early whaling station site, from gathered collectables and demolition materials from all over New Zealand.

A visit to Fleurs Place is something you must put on your list of things to do before you die. Bookman Beattie is fortunate enough to have had a lunch there a couple of years back with Annie, Philip and Sarah and can assure you it was a very special experience.
So special is the place that when celebrity tv chef Rick Stein was told he could go anywhere in the world to write a travel story for London’s Daily Mail he chose Fleurs Place and he said later that “Fleurs Place was everything I hoped it would be”.
High praise indeed, praise well justified. 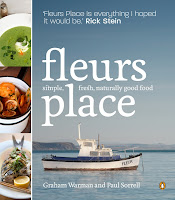 And now we have the book. So if you have been there and would like a marvelous souvenir than here it is, or if you haven’t been and would like to know what all the fuss is about then get yourself a copy of this fascinating, profusely illustrated, mouth-watering book which is cookbook, travel guide and memoir all rolled into one most pleasing package. (NZ$45).
The author, Paul Sorrell, and photographer, Graham Warman, both Dunedin-based, decided a couple of years back that it was time Fleurs Place owner Fleur Sullivan, undisputed matriarch of South Island cuisine for many years, should have her own book, and this great collaboration is the result.
I was not at all surprised to learn that publishers Penguin Books had to order a reprint with a week of publication. And I reckon they will be reprinting again before the year is out.

Fleur Sullivan is a remarkable restaurateur who has a stash of accolades including:
Induction into the Restaurant Association Hall of Fame (2007).
Fleur was made as Officer of the New Zealand Order of Merit (1999).
The NZ Tourism Board presented Fleur with an Enterprise in Tourism Award (1992).
Fleurs Place was recognized by Cuisine magazine as one of the ‘100 best things about New Zealand’
Fleurs Place was the winner of The Café magazine 2007 New Zealand Best Café Awards. It had been runner up for the Best Café Award in 2006 and won the best South Island café in 2005.
VERY IMPRESSIVE ! !
I hope to interview Fleur within the next couple of days, if I can ever get her away from her beloved restaurant for an hour or so! Perhaps I should fly down rather than rely on the phone? I wish!
Watch this space.
Meantime check out Fleurs Place website.
Note - Photographs by Graham Warman. Just a small example of his beautiful work found liberally scattered throughout the book. Thanks Graham.
Posted by Beattie's Book Blog at 1:28 pm

This book just arrived at my house today and it is stunning. The pictures and stories gorgeous and the recipes look very yum...I feel a dinner party coming on...

I've enjoyed coffee at Fleur's Place, but not a meal yet. I hope to rectify that very soon.

Bookman, if passion overcomes common sense and you decide to nip down to Dunedin to interview Fleur, come have dinner at Chez Symon (-:

I've flicked through "Fleur's Place" and will pick up copies when I'm next dining there...I have family in Oamaru & Waimate, and because we still have cribs at Matuatiki kaik'(one of them, battered by the last big sea, is in the book), we make a point of calling into Fleur's everytime we're in the vicinity...excellent excellent food (we celebrated our mother's 80th birthday there last year, and Fleur did us proud) and she is a warm & friendly host to boot...place, book, and especially reccommended as warmly as you have Bookman!

Arrgh! That penultimate line was supposed to read "...place, book and *person*"