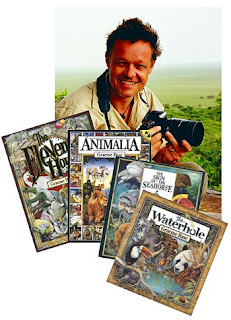 GRAEME BASE - CODES,TRICKS & TREATS
Sherrill Nixon writing in the Sydney Morning Herald, October 25, 2008
ILLUSTRATOR extraordinaire, author, composer, musician, singer, playwright, television producer: Graeme Base is all of the above but above all he sees himself as a problem solver. It has been that way ever since he was a child.
Growing up in England and then Melbourne, the boy who would become Australia's most successful children's book creator was always attracted by the complex, the clever, the weird and wonderful. With his older brother, Patrick, the young Base would communicate in Morse code, invent complicated puzzles and games, immerse himself in the bizarre worlds of Alice In Wonderland and later The Lord Of The Rings, and relish the witty verse of Edward Lear or comedy duo Flanders and Swann.
As an adult, his need for constant mental challenge has not waned. Writing and illustrating a story is never enough for Base; he can't help hiding creatures and objects throughout his artwork and the tricky wordplay or puzzles that are features of his books make repeated readings impossible to resist.
His most popular work, the alphabet book Animalia, has sold nearly 3 million copies worldwide since it was published in 1986, enthralling readers with its alliteration and the addictive hunt for concealed items and the recurring image of a boy. 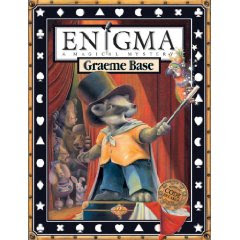 Read Nixon's full story including details of his new title, ENIGMA, at the SMH online.
Posted by Beattie's Book Blog at 7:43 am