Commonwealth nations to fight UK and US publishers' dominance 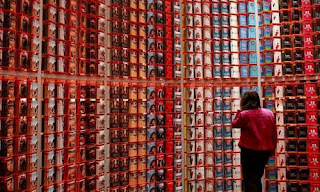 Publishers from Canada, Australia and New Zealand have formed an alliance against their American and British counterparts. They took the platform of the Frankfurt Book Fair to protest the "proprietorial" and dominating presence of the larger book companies.

The countries might be small in terms of output – New Zealand publishes just 2,500 books annually, with Canada and Australia at 16,000 and 14,000 respectively – but they have nurtured a host of major writers. Canada has brought forth Margaret Atwood, Carol Shields and Michael Ondaatje, Australia has produced Peter Carey, Tim Winton and Thomas Keneally and New Zealand has contributed Lloyd Jones, Janet Frame and Katherine Mansfield.
But they often find that British publishers' insistence on British and Commonwealth rights when buying books, and Americans' on North American rights, means they often don't get to publish their homegrown authors in their own territories.

They believe this is holding back their indigenous publishing, and hope that by banding together they will be able to overcome the dominance.

"We are all struggling to free ourselves from the proprietorial attitudes of the US and UK that continue to dominate the publishing world," said Juliet Rogers, chief of one of Australia's largest independent publishers Murdoch Books, and former president of the Australian Publishers Association. "The UK fails to grasp that the Empire is dead and that Commonwealth markets are no longer theirs by right [and] the US views Canadian rights as an automatic extension of their territory, even though they frequently have no intention of responsibly exercising those rights."
Read the full report here.
Posted by Beattie's Book Blog at 6:14 am