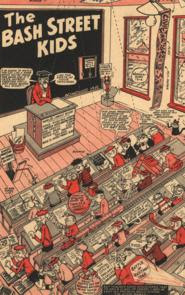 The History of the Beano: The Story so Far
edited by Christopher Riches
Waverley, £25
From The Times
October 24, 2008
Danny Baker on The History of the Beano
The Radio 5 Live DJ recalls a childhood where an iconic comic created a brilliant world of mad possibilities
SHOW ME THE COMIC and I'll give you the man.
To my knowledge there has never been an official study into the effects of cartoons - static or animated - on the emerging male psyche, but clearly such a survey is long overdue. I emphasis male here because, by and large, women, or rather young girls, have an altogether different relationship to the explosive drawn form than their male counterparts.
Broadly speaking, Bunty girls will always prefer life experience over cartoon logic. They will take the real and tangible, via rosette-wearing ponies and dormitory detectives, over the silly and fatuous. Beano boys, however, will go through the rest of their lives doggedly standing this seemingly obvious choice on its head.
Let us take a typical comic example. A person rushes headlong at a wall and, rather than crash intoit with disastrous physical effect, smashes straight through it, leaving the exact shape of their body in the brickwork. Girls will either find this wearily silly or simply smile at the absurdity of the idea and move on. Boys, on the other hand, will treat the image as a Great Truth and something that one day absolutely must be put to the test. The same applies to running off cliff edges without falling; outsmarting a pursuing column of previously aggravated bees who will then immediately form themselves into the shape of a giant question mark; and the belief that when swiftly exiting a scene, one always leaves behind a perfect silhouette in smoke and dust. Speaking of which - just how fast was the Beano's Billy Whizz?
Read the full review at the Sunday Times online.
Posted by Beattie's Book Blog at 6:45 am