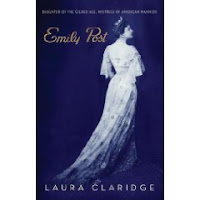 Books of The Times
She Fine-Tuned the Forks of the Richan Vulgars
By DINITIA SMITH writing in the New York Times. Published: October 16, 2008
“She must not swing her arms as though they were dangling ropes,” Emily Post wrote about a young bride in one of the ubiquitous editions of her etiquette books. “She must not shout; and she must not, while wearing her bridal veil, smoke a cigarette.”

EMILY POST
Daughter of the Gilded Age, Mistress of American Manners
By Laura Claridge
Illustrated. 525 pages. Random House. $30.
It is something of a surprise nearly 50 years after Emily Post’s death to be reminded that there was a real person behind the name that has become synonymous with good manners. And it is to Laura Claridge’s credit that she has written the first full biography of Post. An exhaustive researcher, Ms. Claridge, the author of biographies of Norman Rockwell and the painter Tamara de Lempicka, has in this book provided beguiling new details about the taxonomies that governed Post’s life. And Ms. Claridge has situated her within the context of the fast-changing customs at the beginning of the 20th century when she exerted her greatest power.
Emily Post’s first etiquette book, published in 1922, went through 10 editions and was in its 89th printing when she died in 1960. Her syndicated columns appeared in 160 newspapers, she received 3,000 letters a week seeking advice and had a thrice-weekly radio program.
In 1950 Pageant magazine named her the second most powerful woman in America, after Eleanor Roosevelt. “Emily Post’s Etiquette” is still in print, updated by Peggy Post, her great-granddaughter-in-law.
Read the full review.
Posted by Beattie's Book Blog at 8:23 pm