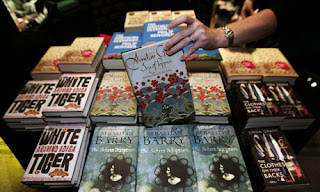 How I judged the Booker and lived to tell the tale
Alex Clark has been a Booker fan since the age of 16, so was thrilled to be picked as a judge. But would her choice prevail?
Alex Clark writing in
The Observer,
Sunday October 19 2008
Twenty-four years previously ...
In a fit of exuberant progressiveness, the school library buys the entire Booker Prize shortlist. In a fit of swottishness and teenage precocity, I read them all. Thus, at the age of 16, I acquaint myself with Anita Brookner's Hotel Du Lac, JG Ballard's Empire of the Sun, Julian Barnes's Flaubert's Parrot, Anita Desai's In Custody, Penelope Lively's According to Mark and David Lodge's Small World. When Brookner wins with a book that I enjoyed but felt was surely too slight to triumph, I ponder on the impossibility of choosing between Ballard and Barnes. A Booker obsession is born.
Late last year
A telephone call from Ion Trewin, the Man Booker Prize's administrator, who asks whether I might consider becoming a judge for 2008. I consider for about two and a half seconds and say yes, overwhelmed by the honour. I spend the next few weeks, before the judging panel is announced, fretting over whether he will ring back to say the committee has thought again. Just before Christmas I meet my fellow panellists - chair Michael Portillo, Louise Doughty, James Heneage and Hardeep Singh Kohli - and find them all most affable. A friend who has previously judged the prize tells me to be wary of making what seem like natural alliances early on, only to have to rupture them later.
January - July
Books arrive in large Jiffy bags at regular intervals, as do emails with bewildering spreadsheet attachments detailing what we've got and what's coming next. I try to heed another piece of advice: don't cherrypick, just select at random, and make sure to write a brief, factual note immediately after finishing each book. 'I felt,' confides another former judge, 'that "X is Y's brother" would have been a more useful observation than "haunting prose".' At the moment, it is all about keeping track - what goes into a discard heap after an initial read, what is set aside for more consideration, what is fast-tracked into the 'possible winner' pile. Over the course of the next few months, 113 novels will be divided according to this basic but effective scheme.
Read the rest here online.
FOOTNOTE
What a refreshing and entertaining story. Wouldn't it be wonderful if we could have something like this from Montana NZ Book Award judges, alas they are prevented by a secrecy regime imposed on them by the organisers.
Posted by Beattie's Book Blog at 5:38 pm