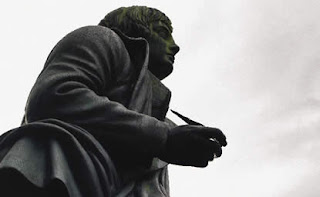 Guest reviewer, and Burns Fellow, Roger Hall writes:
This splendid book has been published to commemorate the 50th anniversary since Ian Cross was appointed Fellow in 1958 (to the angry and public dismay of Maurice Duggan, according to Cross in his memoirs Such Absolute Beginners).
Otago University's English Department did the 33 Fellows who were able to attend proud. After flying us down and providing excellent accommodation, there was an enjoyable dinner on the first night at the Staff Club. All the speeches were short and to the point and Owen Marhsall told a splendid joke about writers.. Even the speech about the haggis was very funny, with the added bonus that no one actually had to eat any.
Unlike the 40th anniversary gathering (where very few Fellows were involved apart from having a group photo taken), this time the organisers had arranged for every one of us to appear on a panel related to whichever genre of writing we were known for.
Maurice Gee, who said during his time in Dunedin he was known at "This year's Maurice" (Duggan and Shadbolt having preceded him) was one of the first speakers on the panels . He gave a most moving account of his year in Otago, explaining that in coming to Dunedin he had left behind a partner and a son in Rotorua and all was not well. Towards the end of the year he had what he had "since come to realise was clinical depression" and lay in bed all day unable to work.
As a result, he felt he had let the Fellowship and the University down (and nearly didn't attend the celebrations because of this). He then made an apology for what had happened, and there couldn't have been anyone in the room who felt that no such apology was required, but admired him all the more for making it. (And, heaven knows, he has more than justified the selection panel's faith in him over the years and rewarded them and everyone else with his writing).
Attendences were very good, and the venue (in the Art Gallery) was ideal, not the least for it being next to the Nova coffee bar/ restaurant where writers gathered for coffee, drinks and food, and members of the public could mingle with the writers, which indeed they did.

Another great plus was the events were all slotted in to the Otago Arts Festival, itself a raging success (plays, music, art, opera) with Fellows being offered free tickets to nearly all the events.

Perhaps the highlight was the unveiling of a plaque at the foot of Robbie Burns' statue commemerating "his" Fellowship, Colin Gibson recited the best poem Burns never wrote, and an official photo was taken of all those present..

It was a shame that two of the Fellows decided (apart from attending the above photo op) not to attend anything else. Considering that the Fellowship gave us all a salary and recognition at a time when it was needed, it seems a little niggardly not to want to give anything in return. On the other hand that was always one of the strengths of the Burns--writers were always left to get on with their work...or not. It was up to them.
RH
Footnote:
The following and pic from the Otago Daily Times who provided excellent coverage of the celebration: 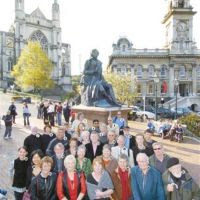 Pic left - University of Otago Burns Fellows who attended the unveiling of a 50th anniversary plaque at the Robert Burns statue in the Octagon yesterday.
The 50th anniversary of the Univer-sity of Otago Burns Fellowship was fittingly commemorated yesterday with the unveiling of a plaque at the feet of his statue.
More than 30 fellows attended the unveiling at the Robert Burns statue in the Octagon, in what Otago Festival of the Arts organisers say was the largest gathering of New Zealand literary talent.
Even the Octagon seagulls were good enough to keep away from their favourite perch during the ceremony.
The earliest Burns Fellow present, 1964 Fellow Maurice Gee, had the honour of unveiling the plaque with Deputy Mayor Syd Brown.
Posted by Beattie's Book Blog at 6:47 am