From The Sunday Times
October 19, 2008 - Sue Fox
A Life in the Day: Doris Lessing, Nobel-winning novelist
The writer, who is 89 this month, won the Nobel prize for literature last year — the oldest recipient of the award. She lives in northwest London with her cat, Yum-Yum. Her new book, On Cats, is out in paperback 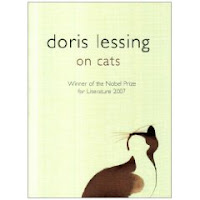 I’m up early to feed Yum- Yum. I got her when she was middle-aged and thought it funny to call her after a glamorous future empress. Yum-Yum was one of the “three little maids from school” in the Mikado, who ended up marrying the Mikado’s son, Nanki-Poo. My own breakfast is just plain yoghurt. I used to drink coffee but can’t have caffeine any more. I stick to water and my son Peter’s Diet Coke. Delia, my Peruvian treasure, shops for me and does some cleaning. But this house is never clean. There’s too much of it — seven flights of stairs. I rarely climb more than two of them now.
I have to lie down for an hour in the morning and afternoon. When my back gave way I learnt a marvellous new phrase: wear and tear. I asked the doctor why my back hurt. “Wear and tear, my dear,” he said. So that’s what I’ve got. In the Royal Free hospital recently, the consultant told me I have heart failure. Then he said: “But think nothing of it.” In my vocabulary, failure associated with heart means dead or dying. He assured me it was just an expression for when you have two things wrong with the heart. I never used to give my health a moment’s thought. Now
I feel consumed by it. This week I was told I have a wonderful complexion and shiny eyes. I put that down to indignation at how I feel! I have no energy any more. It’s intolerable, especially when I think of how I used to be.
After my morning lie-down I read the Telegraph and The Independent, then I might scribble a few letters. The fact is that ever since I won the Nobel, all I do is talk — whether I know anything about the subject or not. I once gave a talk at a university in New York. At the end, a girl asked: “Now, Mrs Lessing, tell me the meaning of life.” I replied: “What makes you think I know it?” She said: “Come on. Don’t be like that. Don’t hold out on us.”
Read the rest of Doris' day at The Sunday Times online.
Posted by Beattie's Book Blog at 10:36 am