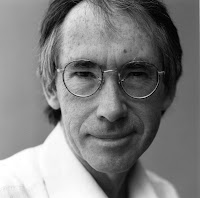 McEwan opera has London premiere
Ian McEwan's novels include Amsterdam and Saturday
An opera featuring a libretto by Booker prize-winning novelist Ian McEwan has had its first performance in London.
For You, about an arrogant composer who yearns for the thrills of his youth, is being staged at the Royal Opera House's Linbury Studio.
McEwan said he had been "half bullied" into collaborating with the composer Michael Berkeley, a long-time friend.
The author added he deliberately chose themes of sex, obsession and adultery because he believed they suited opera.
Read the full BBC report at the BBC online.
Posted by Beattie's Book Blog at 7:01 am