GARRISON KEILLOR - THE BOOKMAN IS A FAN
Keillor is a brilliant broadcaster, a great writer and humourist, a soporific crooner and altogether a most interesting man.

He first appeared on my radar back in the MID-80's when Robert McCrum published his Lake Wobegone Days at Faber in the UK. This was a huge gamble, the man was unknown outside the US, but it eventually paid off when his reputation as a superb droll and insightful broadcaster took off and radio networks around the world began to play his programmes, including Radio New Zealand and many a happy hour I spent listening to the man. (McCrum was like that, he had a real eye for highly talented writers wherever they might hail from, he was unique really in UK publishing).

Keillor is high on my list of people I most want to have dinner with. Perhaps in NY where he once lived for a while. Perhaps Robert McCrum could join us?

Tonight we watched Keillor's programme, God Bless America, on Sky TV's often superb Documentary Channel, where his love and affection for his home town, Minneapolis/St.Paul was clearly displayed as was his huge suspicion and alarm at the fundmentalist right wingers of America.
Great television.
Thanks Garrison, what about dinner in New York in 2009 sometime? Robert? I'll happily fly over from New Zealand. 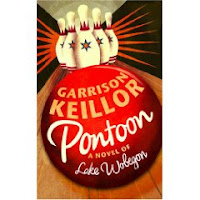 I'm a big GK fan too. One of the best things I think he's ever done was the series of interviews called Literary Friendships where he interviewed pairs of American writers about their friendships and their work. My favourite is with Robert Bly and Donald Hall, but there are other fabulous ones too. Hear them at http://literaryfriendships.publicradio.org/
Highly recommended.

Many thanks NZ Bookgirl. I have just had a look at the website which in itself is most impressive. Will have a listen to some of the conversations over the holiday weekend.