Amazon is 10 years old - but is anyone celebrating?
From Guardian blogger Stuart Evers.
In a well-observed, if rather self-indulgent, scene from Michel Faber's new novel, The Fire Gospel, Theo Griepenkerl logs on to Amazon to see how his book is faring. The reader comments he finds – which Faber gleefully fabricates, complete with misspellings – vary from the ill-informed to the seething ramblings of the personally affronted. Exasperated he logs off, only partially appeased by the fact that he's is riding high in the Amazon charts. It's an interlude that shows just how divisive his book has become, and inadvertently reminded me of how far Amazon has come in just 10 years. 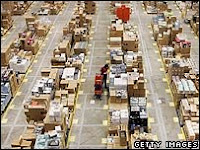 Back in 1998, before Amazon arrived with a co.uk suffix, the book trade was in a massive state of flux. The Net Book Agreement had recently been dissolved, Dillons and Waterstone's were duking it out for market supremacy, and Tesco was yet to hit upon the idea of lumping books alongside baked beans. Amazon's arrival was heralded as the future: the website that would change forever the way books were bought. In the opulent surroundings of Dillons in New Street, Birmingham, myself and other booksellers laughed off bullish predictions by Jeff Bezos, Amazon's founder, of the company's future market dominance.
A decade later, and such an attitude seems at best naive and at worst incredibly myopic.
Read stuart Evers full poice on his blog.
Posted by Beattie's Book Blog at 6:42 am