The major interview with Margaret Mahy will be a highlight for book lovers tomorrow morning on Kim's Radio New Zealand National programme. Don't miss it. 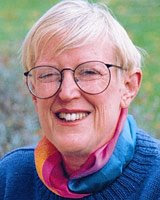 Margaret Mahy has been writing poems, stories picture books and novels
for more than forty years. A member of the Order of New Zealand, an
Honorary Doctorate of Letters and twice winner of Britain's Carnegie
Medal for Children's Literature, she has also been honoured by the Arts
Foundation of New Zealand as a Living Icon, received the Prime
Minister's Award for Literary Achievement in Fiction, and been awarded
the Hans Christian Andersen Medal for her contribution to children's
literature.

Her new young adult novel, The Magician of Hoad
(HarperCollins) is an epic tale of love and treachery.

This is a long and important interview.


Readers of this blog will probably also appreciate the Nick Pearson
interview...
8:12am - Nicholas Pearson: chimps and typewriters
the frivolous (but very funny) Cheeta "autobio" is the
hook, but most of the interview will be about Fourth Estate and how he sees
the future of book publishing.