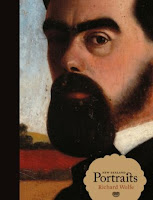 I wrote about the launch of this magnificent book last week and over the weekend I have had an opportunity to spend several happy hours reading and perusing it.
I felt envious of the task Penguin Books publisher Geoff Walker had given the author. Not that I would have the ability or knowledge to carry out such a task but in theory at least the idea was most appealing.
Wolfe of course has a Bachelor of Fine Arts degree from the University of Auckland, was a longtime curator at the Auckland War Memorial Museum, is a highly respected art and social historian and commentator. As well as an author of several books. He was the perfect choice for this major new work.

Our portrait painters have long faced two serious challenges; the nation’s preference for landscape subjects, and its resistance to hanging images of people on its walls. As to what constitutes a ‘New Zealand portrait’, this survey is elastic enough to consider paintings of New Zealanders by outsiders and, conversely, ‘our’ view of others. And while a portrait might be expected to show an acceptable likeness, around 1935 our most celebrated expatriate, Frances Hodgkins, depicted herself as a collection of personal objects, among them scarves and a high-heeled shoe. Since then our portraitists have adopted an increasing range of styles and inventive approaches. While some have been favoured with important commissions, others have necessarily had to paint compliant friends and family members, or perhaps subjects drawn from history. But whatever the motivation, collectively these portraits represent a unique record of New Zealanders viewed over time.
With organized European settlement in the mid-1800s, landscape paintings dominated New Zealand’s early easels. But with the arrival of trained overseas artists at the end of the century, portraiture was now taught and actively encouraged. Before long, the genre’s recent revival in Edwardian England had an echo in New Zealand, particularly in Canterbury. From the 1930s that region also saw the emergence of a distinctive local style, and Rita Angus’s 1942 painting of her friend Betty Curnow would become one of the most popular and best known of all our portraits. But if the activity had gathered some momentum, it faltered in the postwar period when it now faced further competition from a new arrival - abstraction. A low point was reached in the mid-1960s, but portraiture was then about to enjoy a phoenix-like revival. In Auckland it was taken up by a new generation of artists including Robin White, Michael Smither and Ian Scott, whose influences included Rita Angus and the teaching of Colin McCahon, while in Christchurch such young portraitists as Alan Pearson, Tony Fomison and Philip Clairmont adopted a more expressionistic approach. And now, nearly 170 years after painting was first pronounced dead at the hands of photography, New Zealand portraiture is as vibrant as ever, as shown by a new breed of practitioners including Peter Stichbury, Gavin Hurley and Heather Straka.
(Thank you Richard, excellent).
Then of course the portraits, each with its own page and Wolfe’s useful, well crafted comments on each one on the opposite page.
I guess it is something of an old fashioned design approach but it works and seems appropriate.
Random comments then as I worked my way through the book over the holiday weekend (it is a large book by the way, one you read at the table or in the lounge, not in bed!)

*All the expected artists are represented – Charles Goldie, Raymond McIntyre, Frances Hodgkins, Christopher Perkins, Lois White, Rita Angus, (three by her, the only artist with more than one image and that is fair considering her speciality and output of portraiture), Evelyn Page, Peter McIntyre, Ian Scott, Robin White, Nigel Brown, Peter Siddell, Jacqueline Fahey, Robyn Kahukiwa, Mary McIntyre, Peter Stitchbury and Dick Frizzell. There are many more of course because there are more than 80 artists represented in total.
*And for me as a layman in the arts area there were quite a number of artists of whom I had not known previously. Ivy Fife (1905-1976) for example with her beautifully executed portrait of Peter (1942).
*Nice to see one of Peter McIntyre’s famous war portraits – this one of Major-General Sir Bernard Freyberg.
*I had no idea that artist Louise Henderson (1902-1994) was born in France.
*Greatly admired the 1957 portrait by Colin McCahon of his daughter Victoria. Hadn’t seen that painting before.
*The portraits by Philip Clairmont and Tony Fomison seem to reflect their tortured souls.
*Love the portrait of Tony Fomison by Alan Pearson.
*Mary McIntrye’s portrait of Michael Smither is great fun. Smither also has a portrait included.
*Good to see one of Glenda Randerson’s portraits from her 24 strong series of authors – this one of Catherine Chidgey painted in Albert Psrk in 2000 when Chidgey held the Buddle Findlay Sargeson Fellowship.
*Richard Killen’s portrait of Cool McLeavey is great fun as is Grahame Sydney’s 2002 portrait of Robin Judkins
*My favourite – A close call but I’ll go for Evelyn Page’s 1937 oil on canvas portrait of Charles Brasch.

This is a splendid piece of work by Richard Wolfe, a big, handsome and most interesting book that I am delighted to put on my bookshelf, it will be pulled down often.
Posted by Beattie's Book Blog at 6:48 am

Is this the same author that did the Tim Russert book at http://www.timrussertbook.com/ I enjoyed this book and would like to read more by Richard Wolfe