This review by The Bookman appeared in the Canvas magazine section of The Weekend Herald, Saturady October 18: 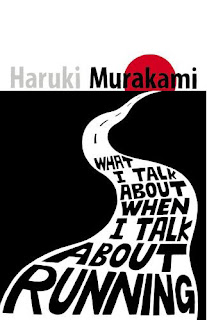 This is a curious slender hardcover book. Curious because it is a work of non-fiction by one of Japan’s most highly regarded contemporary novelists,(among his many honours is the Franz Kafka Prize), and curious because one cannot imagine anyone finding the subject matter of interest unless they are a runner or a writer or both which surely greatly reduces the size of your market.
For my part I ran three marathons back in the 1980’s with the Auckland YMCA Marathon Club so I was greatly intrigued with the idea of Murakami’s book although before reading I did wonder how anyone could possibly write a whole book on the subject.
He began running on a daily basis in 1982 aged 33. His first novel was written in 1978 but once finished he wasn’t sure what to do with it so he entered it in a literary magazine’s new-writers prize.
The novel subsequently won the prize and was published the following year. He wrote two more novels and then decided to become a fulltime writer.
“A problem arose, though, with my decision to become a professional writer the question of how to keep physically fit. I tend to gain weight if I don’t do anything. Running the bar,(his previous job), required hard physical labour every day, and I could keep my weight down, but once I started sitting at my desk all day writing, my energy level gradually declined and I started putting on the pounds .If I wanted to have a long life as a novelist, I needed to find a way to keep fit and maintain a healthy weight”.

He quickly decided that running had advantages, no one else needed and no special equipment required. So began his running life, short distances at first, 20 or 30 minutes a day, building up to an hour a day six days and week and finally reaching marathons and triathlons.
He has now run 25 of them worldwide. And during this time had 12 novels published.

Much of the book is taken up with his account of training for the New York City Marathon in 2005 although one must say that a good deal of it is about the author himself rather than about the running detail.
He draws parallels between his running and his writing, both are long term, both require a focus on the end result, both can be physically demanding, both have motivations and methods not necessarily understood by non-participants, and in both one is always trying to do a personal best. Today Murakami can’t do one without the other. Running is essential to his literary output Of writing novels he says “ it is basically a kind of manual labour, the whole process requires far more energy, over a long period than most people ever imagine”. Running he says is the best training for writing.
Not being a novelist myself it will have to be for someone else to say whether or not he is correct but I can say that even though this volume is slender it does feel somewhat padded and my respectful advice to Haruki Murakami is “ stick to writing fiction, you do it so much better”.
Posted by Beattie's Book Blog at 7:49 am