OOPS !! I MISSED ONE

In my post on Wednesday regarding four books all dealing with the culinary history of New Zealand I missed out a title. There are actually five, not four as I suggested. Thanks to those friends who have pointed out the error of my ways. 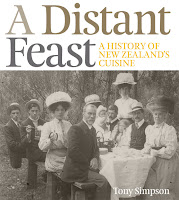 The one I missed was A DISTANT FEAST, by Tony Simpson,
Random House, $44.99 and it was published in September this year.

My apologies to all concerned. However in my own defense I will say that this title does differ somewhat from the others in that it is written by a well-known, highly regarded social and cultural historian, and also it deals with the origins of New Zealand’s cuisine rather than the present day practices. Indeed most of the fabulous photographs and other illustrations liberally scatterd through the book are from Victorian times. 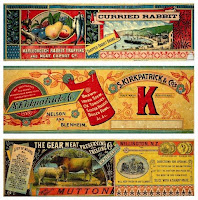 Having said that I must add that in a country where our biggest-ever selling book is the Edmonds Cookery Book then this foodie history should be a hit with NZ readers.

I love these labels. 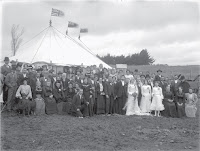 ok at this 1895 Taranaki wedding scene, below left. Could almost be today with the marquee, white bridal gown and men in suits! Loads of great photos are a real feature of the book.

Tony Simpson is a Wellington-based social and cultural historian, writer and lover of good food.
He attended Canterbury University, completing a BA in Politics and an MA with Honours in History and Politics. Tony takes a strong interest in food and cooking and was a restaurant reviewer for Cuisine magazine, had a food column in Wellington City magazine and has been a regular contributor to Dish magazine. He has published 14 other titles including The Sugarbag Years, for which he won the Watties Writing Award in 1974.
Posted by Beattie's Book Blog at 9:38 am

A Distant Feast is a reprint, first out in 1999. It is a goodie indeed, but not new.