Next week Hamish Keith will give two lectures on The Big Picture and show episodes of the television series at The Centre for New Zealand Studies, Birbeck College The University of London.

The Centre will also host a London launch for his autobiography Native Wit.
To support Hamish’s trip – he was turned down by Creative New Zealand on the grounds that his lectures did not “fit their international strategy” - Auckland’s Muka studios has published a limited edition lithograph, Hamish Keith’s first art work in almost four decades. 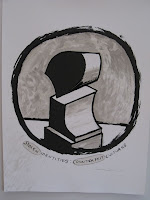 The lithograph title Stolen Identities: Counterfeit Cultures is the same title as his first London lecture.
It is in an edition of 30 and is $350.
Posted by Beattie's Book Blog at 12:41 pm