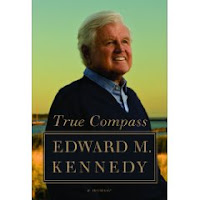 I read the following para in the International Herald Tribune this morning, Wednesday, July 15:

At a time when publishers are scrambling to keep customers willing to pay $26 for a hardcover book instead of $9.99 for an electronic version, the publishers of Senator Edward M. Kennedy’s forthcoming memoir is going in the opposite direction – issuing a limited edition it plans to sell for $1000 a copy. Twelve, an imprint of Grand Central Publishing, is planning to issue 1000 copies of a leather bound edition of “True Compass”, with an electronic replica of Senator Kennedy’s signature, and sell the books through the Web site of Hachette Book Group.
Posted by Beattie's Book Blog at 2:44 am