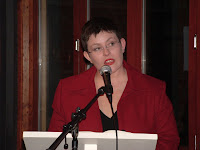 
Joanna Preston's collection The Summer King, winner of the inaugural Kathleen Grattan Award 2008, was launched at a very well attended event at The Twisted Hop in Christchurch on Montana Poetry Day. On a bleak midwinter evening, the guests kept

arriving, daring the cold for the wit and warmth of what proved to be an outstanding launch event.
Fleur Adcock, in judging the inaugural Kathleen Grattan Award described Preston's The Summer King as showing "technical skill, verve, wit and humanity". Renowned British poet, Gillian Clark, has further described The Summer King as "this fine and fierce first collection", sentiments endorsed by James Norcliffe when he introduced both Joanna and the collection on Friday evening.
In the best Australasian tradition—Preston is an Australian by birth, married to a New Zealander—Friday evening's launch was an event of two halves, with the first part of the evening comprising the launch of the collection. As well as James Norcliffe, Otago University press publisher Wendy Harrex spoke of the deep sense of privilege OUP/Landfall felt in administering the Kathleen Grattan Ward and the delight of all at the press in being able to bring The Summer King to New Zealanders as the inaugural award winner. The very high quality of the collection design by Sarah Maxey was also commented on by Norcliffe, Harrex and Preston herself.
The highlight of the launch, however, was Preston's reading from the Venery sequence within the collection, where both she and the poems displayed both Adcock's "technical skill … verve … and wit" as well as that "fierce fineness" alluded to by Gillian Clark, demonstrating that these are not only poems that live on the page, but repay performance as well.
In the second part of the evening, Preston invited four fellow Christchurch poets, Helen Yong, Sean Joyce, Bernadette Hall and James Norcliffe, to read and discuss a "touchstone" poem and why it had particular significance for them, as well as reading from their own work. This section of the evening added a diversity beyond the usual for poetry launches, giving the event a depth appropriate to Montana Poetry Day—and some poetic alchemy must indeed have been in the air, for David Ault of Madras Café Bookshop, behind the book table, reported over 30 copies of The Summer King sold.