‘Life of Pi’ Author Is Said to Get $3 Million Deal
By MOTOKO RICH writing in The New York Times
Published: July 17, 2009
Seven years after winning the Man Booker Prize for “Life of Pi,” the global best seller about a shipwrecked Indian boy sharing a boat with a tiger, Yann Martel has sold a manuscript for his follow-up for around $3 million, according to people familiar with the negotiations. 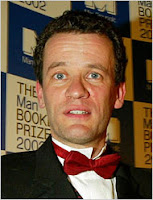 Reuters
Yann Martel in 2002.
After a monthlong auction Spiegel & Grau, an imprint of Random House, one of the world’s largest publishers, bought the rights to publish Mr. Martel’s third novel, as yet untitled, in the United States sometime next year. Like “Life of Pi,” the new book is an allegory — this time about the Holocaust — involving animals. It relates the story of an encounter between a famous writer and a taxidermist who is writing a play that features dialogue between a donkey and a monkey, both imprinted on a shirt.
“I’ve noticed over the years of reading books on the Holocaust and seeing movies that it’s always represented in the same way, which is historical or social realism,” Mr. Martel, 46, said in a telephone interview from his home in Saskatoon, Saskatchewan. “I was thinking that it was interesting that you don’t have many imaginative takes on it like George Orwell’s ‘Animal Farm’ and its take on Stalinism.”
Mr. Martel said that although there had been a few works — like “Life Is Beautiful” in film or the “Maus” books by Art Spiegelman — that had been more metaphorical, artists were generally “fearful of letting the imagination loose on the Holocaust.”
“So my novel is an attempt to get a distillation on it,” Mr. Martel said, “and see if there is a way of talking about the Holocaust without talking about it literally.”
Publishers were inevitably interested to read this latest manuscript because of the blockbuster success of “Life of Pi,” which soared onto best-seller lists after it was published in the United States in 2002 and sold more than 185,000 copies in hardcover, according to Nielsen BookScan, which tracks 70 percent of sales. In paperback it sold nearly two million copies. It won the Man Booker Prize, Britain’s most prestigious literary award, in November of that year.
For the full story link here.
Posted by Beattie's Book Blog at 7:51 pm