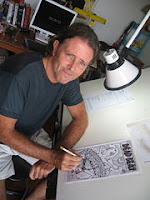 Colin Cotterill (pic left) has won the Dagger in the Library; writer Fred Vargas and translator Sîan Reynolds have triumphed in the International Dagger for the third time in four years; Sean Chercover has won the Short Story Dagger and Catherine O'Keefe the Debut Dagger.
At the award ceremony it was also announced that Crime Writers' Association and Cactus TV are to join forces to celebrate the Crime Thriller Dagger Awards, which will take place on Wednesday, 21st October, 2009.
More at the CWA website
Posted by Beattie's Book Blog at 4:22 am

Interesting decision by the CWA judges in terms of Vargas winning yet again. Was the least popular book of the six finalists in a poll on EuroCrime*

Wonder if the judges are just very enamoured with Vargas... haven't read all six finalists so can't fully comment myself.

* Note: I just checked the EuroCrime poll, and since I last looked, Vargas has just sneaked ahead, in terms of now being the 5the 5th most preferred of the 6 finalists, rather than dead last.

I really liked The Chalk Circle Man, but then, I haven't read any of the other finalists, so don't have a point of comparison, though I can see how some people may find Vargas a little waffly. May be I'm waffly.

Some of the comments on Detectives beyond Borders about the winners are very, well, er, strong.