Dave Eggers: My Generation
The American novelist champions irony and lost causes. Now cinemas are yielding to his curious view of the world. What makes him tick?
By Paul Vallely writing in The Independent, Saturday, 25 July 2009 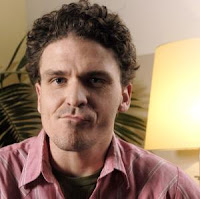 Let us begin with a wise, witty, rather foxy and extremely artful intro. Come on, make an effort. We are not dealing today with someone who will offer you everything on a pre-postmodernist plate. This is about Dave Eggers, the voice of Generation X, the most influential man in contemporary American literary circles, and all the rest.
But before you dismiss Eggers as another Daedalean clever clogs with a impossibly long list of list of facile, self-referential, sarcastic and ever so coooooool achievements to his credit, take a look at this website
Bear with it past the first five or six minutes. This man may look like a flake. And his cultish autobiographical memoir A Heartbreaking Work Of Staggering Genius may be too clever by three-quarters with its hip self-deprecation and too-chic-to-be-comprehensible language games. Eggers is a force of nature, so sit up and take notice. But he can tell stories too – when he wants to – and plain, compelling and magical ones at that. Screenplays for Sam Mendes' Away We Go, co-written with his wife and released last month,and Spike Jonze's next film, out in October, are pricking Hollywood ears. So let us turn him into a story and shape some patterns of meaning out of the chaos of his hyper-sophistication.
Eggers burst upon fashionable literary consciousness barely nine years ago with the publication of his Heartbreaking memoir. In the US, the book was a huge critical and then commercial success. It reached No 1 in The New York Times bestseller list in 2000 and was nominated for a Pulitzer Prize. Time magazine named it Best Book of the Year. It told the story of how, when Eggers was 21, both his parents died within a year, his mother from stomach cancer and his father from brain and lung cancer.
Read the full story at The Independent online.
Posted by Beattie's Book Blog at 2:26 pm

Graham,
The link to the TED site is not producing naything? I'd like to see what you were talking about. Great post.

Oops. Link to The Independent now working.
Thanks, Best,