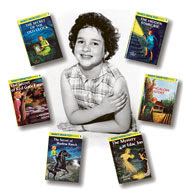 The mystery of the Nancy Drew following
By JAN HOFFMAN
Published in the International Herald Tribune: July 28, 2009

WHO was your Nancy Drew?

“She was a team leader,” said Susan Silbermann, 47, who, as a Baltimore tween, painstakingly collected the series about the Girl Sleuth and her sidekicks. Ms. Silbermann became a team leader herself — president of Pfizer’s pharmaceutical business in Latin America.
And who was your Nancy Drew?
“I didn’t connect with her,” said Sara Paretsky, 62, the crime writer, whose own female gumshoe is the cranky smart mouth, V. I. Warshawski. “She had so much domestic support and I grew up in a fractured household without support.”
But the imprint was inescapable, Ms. Paretsky said. In middle age, she gave herself a roadster “and I do feel so tough and a little Nancy Drewish.”

Nancy Drew was invoked last week during the Senate confirmation hearings for Judge Sonia Sotomayor. She has said that her Nancy Drew represented boldness and intelligence, the books a gift from a hardworking single parent. In recent years, Laura Bush, Hillary Rodham Clinton, Ruth Bader Ginsburg, Gayle King and Diane Sawyer have described themselves as fans.
Touchstone, pole star, reflecting pool. Often what women remember about the books speaks to who they were — shy girls seeking inspiration; smart girls seeking affirmation. The series even gave voice to girls who rebelled against the Girl Sleuth’s pearl-necklace perfection.
All told, the women’s recollections capture the impact of a formulaic, ghostwritten series approaching its 80th year.
“I’m amazed by how people can read the same book and have different perspectives,” said Jenn Fisher, 35, an Arizona-based former lawyer who runs Nancy Drew fan conventions. “She’s a good role model and she brings the great nostalgia of remembering your childhood.”
Since its debut in 1930, the series has thrived in a germ-free bubble, scarcely brushed by time and social upheaval. Nancy Drew, 16 or 18, depending on the edition, is a daddy’s girl, living with her father, Carson, a lawyer — her mother conveniently died when she was 3 — and housekeeper, Hannah Gruen, in a comfortable home in River Heights where the words “Amber Alert” have never been heard.
Read the full story online.
Posted by Beattie's Book Blog at 10:48 pm