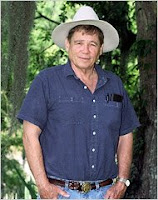 If James Lee Burke has the deepest regional voice in the genre — and I do believe that’s so — it’s because he understands those feelings that keep people connected to the places where they have, or once had, roots. When Hurricane Katrina ripped through New Orleans, it swept all kinds of people, criminals among them, out of their natural element and into the strange foreign land called Texas. RAIN GODS (Simon & Schuster, $25.99) is Burke’s version of a range war in southwest Texas — a pitched battle between gangs of displaced bad guys, fighting among themselves for the new territory against the outmatched locals.

Related:
‘Rain Gods’: Excerpt Author Web Site
‘Awakening’: Excerpt (pdf) Author Web Site
More Crime Columns
Some of these boldly drawn newcomers, like the former owner of a floating casino who relocated to an exclusive community in San Antonio and now runs a sleazy skin club on the highway, are living like “colonials in their own country.” Others are stuck in hellholes like Chapala Crossing, a rusty-dusty town on the Mexican border that takes its visual definition from an abandoned filling station and a crumbling church.
Hackberry Holland, the tall, taciturn sheriff — and cousin of Billy Bob Holland, the lawyer-lawman in a Western crime series by Burke — finds the decomposing corpses of nine Asian women buried in the field behind the church, collectively mowed down by a World War II machine gun and plowed under by a bulldozer. The women were prostitutes and drug mules in an organized-crime ring run by a shadowy Russian mobster based in Phoenix. Whoever among the crime boss’s many competitors ordered the mass murder, it was executed by the legendary hit man Jack Collins, known as Preacher and both feared and respected for being “a mean motor scooter and crazy ­besides.”
Crazy he may be, but Preacher is one of Burke’s most inspired villains — violent and cruel, but also profoundly moralistic and self-loathing, qualities that he shares with Hackberry Holland, as he informs the guilt-haunted sheriff when they finally meet. Preacher will kill any number of people in imaginative ways, yet spare the foolish men and furious women who are offered to him as sacrificial victims. But while Preacher is a treat, camped out in the desert and howling to nameless ancient gods, you don’t want to under­estimate the locals, who have their own deities to answer to. Even Preacher gets that. “These are religious people,” he says. “Disrespect their totems and feel their wrath.” Right now, the native gods are withholding their blessings because of the killers and lowlifes who have brought the blight. But with good guys like Holland on the job, it might yet rain on this parched land.
To read the complete column link to NYT online.
Posted by Beattie's Book Blog at 2:18 am