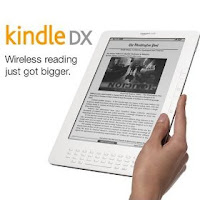 More reasons to worry about ebooks than I thought
Ebooks are changing literary culture in numerous ways, none of them reassuring
Guardian blogger Sam Jordison.
Under a post I wrote last week touching on the future of publishing and emerging ebook technology, a commenter (whom I can now out as Paul Emmanuelli, since he deserves credit for the ideas in this piece – the good ones, anyway) pointed out that so far most of the debate focused on how pleasant (or not) they are to use and "the End of Books as we know them" ... But there is so much more involved.
He asks of the Kindle, for instance, "What will its impact be on high street retailers? Does it open the back door for Amazon to become a monopolist retailer (and then publisher)? – Will the price of digitised books be driven down to the extent that margins/prices on hard-copy books are pushed up? – Where does the author stand in all this?" He also raises interesting questions about the potential benefits such travel-friendly devices might yield ("Could this be the rebirth of the serial and the short story, where commuters read the latest release on their way to work and talk about it when they arrive?") and about how the devices might be used to breed brand loyalty for publishers and writers.
Clearly, it's a debate worth having. It seems that ebook readers are on the way, no matter what we think of them, so we're going to have to work out how to use them to the best advantage of everyone involved.
Yet bowing to the inevitable as far as ebook readers is concerned is not something that should be done lightly, especially in the light of stories such as this: Late last week, several books downloaded by US Kindle users were deleted in the wake of a copyright issue. The first most users knew about it was when these books disappeared from their devices – a particularly disconcerting experience, one imagines, for those who were midway through 1984 – since, of course, the gods of irony had ensured Orwell was on the list of books deleted.
An Amazon spokesman responded to the Guardian's Bobbie Johnson, saying: "These books were added to our catalogue using our self-service platform by a third-party who did not have the rights to the books … When we were notified of this by the rights holder, we removed the illegal copies from our systems and from customers' devices, and refunded customers."
Read his full piece here.
Posted by Beattie's Book Blog at 10:31 pm