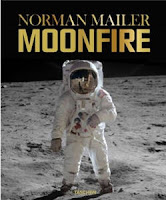 ONE of the most expensive books in history has gone on sale. Branded the ultimate in coffee-table chic, Moonfire, which chronicles the Apollo 11 lunar mission, enables its owners not only to read about the moon but also to touch it.
The extra-large tome features glossy photos of the landing from the archives of NASA and Life magazine and each copy is signed by Buzz Aldrin, the second man to walk on the moon.
In total, 1969 copies of the book are being produced and most will be available online for about $US1000 ($1216). Only the final 12 copies come with pieces of moon rock that crashed to earth as meteorites.
The samples range from 0.4g slivers to a 30.34g rock.
"It will be thousands, hundreds of thousands, of dollars. Kind of like a diamond," said Creed Poulson, the public relations manager at Taschen America, the publishers.
The book, released to coincide with the 40th anniversary of the moon landing, narrates the event through the words of one of the most influential writers of the time, Norman Mailer.
His feature on the landing, written for Life in 1969 and subsequently turned into a book, Of a Fire on the Moon.
That has been hailed as a seminal work providing a cultural and philosophical analysis of the US space program and Apollo 11 story.
The new book includes copies of Mailer's notes and manuscripts as well.
Posted by Beattie's Book Blog at 10:53 pm