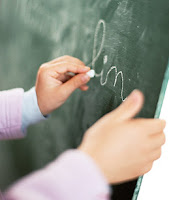 Laurence Mouton / Corbis
I can't remember how to write a capital Z in cursive. The rest of my letters are shaky and stiff, my words slanted in all directions. It's not for lack of trying. In grade school I was one of those insufferable girls who used pink pencils and dotted their i's with little circles. I experimented with different scripts, and for a brief period I even took the time to make two-story a's, with the fancy overhang used in most fonts (including this magazine's). But everything I wrote, I wrote in print. I am a member of Gen Y, the generation that shunned cursive. And now there is a group coming after me, a boom of tech-savvy children who don't remember life before the Internet and who text-message nearly as much as they talk. They have even less need for good penmanship. We are witnessing the death of handwriting.
People born after 1980 tend to have a distinctive style of handwriting: a little bit sloppy, a little bit childish and almost never in cursive. The knee-jerk explanation is that computers are responsible for our increasingly illegible scrawl, but Steve Graham, a special-education and literacy professor at Vanderbilt University, says that's not the case. The simple fact is that kids haven't learned to write neatly because no one has forced them to. "Writing is just not part of the national agenda anymore," he says.
The full story at TIME.
Posted by Beattie's Book Blog at 7:04 pm