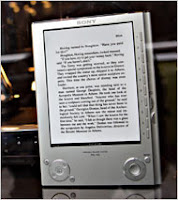 andom House digs in over e-book rights
24.07.09 Benedicte Page in The Bookseller
Random House UK has come under fire from literary agents for offering e-book royalty rates below other publishers.
Negotiations with some literary agents have reached what was described by one as an "impasse", though RH said it was "working hard to establish an economically viable model which rewards both authors and publishers fairly".
Carole Blake of Blake Friedmann said that Random House had signed no new contracts with the agency since November 2008. "I find it completely ludicrous that one branch of an international publisher is trying to say that 17.5% or 20% is the norm, when every other publisher in the UK has gone public on 25%," she said.
Another literary agent said negotiations with RH had been "amicably" suspended when the publisher offered 25% for major authors but a lower rate for those with smaller sales. "We only agree blanket terms. We're not prepared to offer favourable terms for some authors and not others," the agent said.
Another senior agent commented: "Quite a few agents seem to have reached an impasse [with Random House UK]. It is interesting that they have chosen to dig in on this." Blake added that RH was not signing contracts where the e-book rights had not been agreed, though other agents said this was not the case, with e-books rights set aside from some deals.
Industry sources said that a figure of 25% was becoming standard, though some admitted that it could be "variable". One agent said: "Random House is the only publisher not offering 25% as its best standard rate but not all agents are getting 25% from all publishers." Penguin m.d. Helen Fraser said: "Our standard e-book royalty is 25% of net receipts. My sense is that the industry is probably settling between 20% and 25%. Some publishers are offering the same to everybody and some are having a gradated scale."
A Random House spokesperson said: "We cannot discuss our specific royalty rates as they are subject to confidential agreements, and we do not know, so cannot comment on, the rates other publishers are offering. The e-book market is still a very young market which will continue to evolve and our royalty rate is just part of an overall very attractive author package."
Posted by Beattie's Book Blog at 2:23 am

I find it interesting that the agents are so inflexible on this. Surely the marketplace place speaks. Surely a top 10 selling author is in a better bargaining positioning that a top 100 selling author who is in a better position than etc etc. If the industry sets a standard then the publishers could just sign the authors direct, the agents have no purpose. A simplification I know but hopefully you get the point.