Former Christie's director to sue Random House US in UK
29.07.09 - The Bookseller 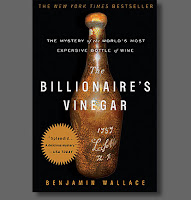 A former director of auction house Christie's is suing Random House Inc for defamation of character, under UK laws, the Decanter reports.
Michael Broadbent, who is also a "longstanding columnist" for the magazine, is suing over the book The Billionaire's Vinegar, which is published in the US by Random, although is available in the UK.
The book tells of the 'Jefferson bottles affair', in which a cache of more than a dozen bottles engraved Th. J reportedly came to light in 1985. One of the bottles was sold for more than $150,000 - a record-breaking amount. But the person who first discovered the bottles, Hardy Rodenstock, is being sued by "billionaire businessman" William Koch for being the source of four allegedly fake bottles.
Broadbent claims the author Benjamin Wallace "accuses him of inventing a bid for the half-bottle of 1784 Margaux, to ensure the final buyer paid over the odds".
He also argues the author inaccurately portrays him "'colluding' with Rodenstock"
Decanter.com
Posted by Beattie's Book Blog at 9:25 pm

Michael Broadbent would not collude with anybody to "fix" a price- sounds like Random will need to print some dollar bills instead of books...