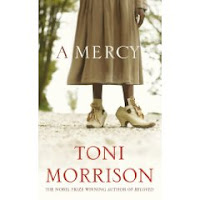 Original Sins
By DAVID GATES writing in The New York Times, November 28, 2008
A MERCY
By Toni Morrison
167 pp. Alfred A. Knopf. $23.95
The Greeks might have invented the pastoral, the genre in which the rustic life is idealized by writers who don’t have to live it, but it’s found its truest home in America. To Europeans of the so-called Age of Discovery, the whole North American continent seemed a sort of Edenic rod and gun club, and their descendants here still haven’t gotten over their obsession with the pure primal landscapes they despoil with their own presence.
A straight line — if only spiritually — runs from Fenimore Cooper’s wild Adirondacks and Hawthorne’s sinister Massachusetts forests to Hemingway’s “Big Two-Hearted River” to Cheever’s domesticated locus amoenus of Shady Hill to the theme park in George Saunders’s pointedly titled “Pastoralia” — where slaughtered goats are delivered to employees in Neolithic costume through a slot in the wall of their cave, much as Big Macs appear at a drive-through window.
The line even leads to “Naked Lunch,” which pronounces America “old and dirty and evil before the settlers, before the Indians” — simply a calculated blasphemy. Apply enough ironic backspin, and almost any American novel this side of “Bright Lights, Big City” could be called “American Pastoral.” Or for that matter, “Paradise Lost.”
Read the full piece by David Gates at The NYT online.
Posted by Beattie's Book Blog at 1:29 pm