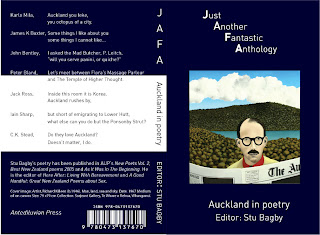 JAFA
Just Another fantastic Anthology
Auckland in Poetry
Edited by Stu Bagby
Antediluvian Press -$28.95
Stu Bagby, who has been writing poetry for many years, published in various literary journals and several anthologies including Best New Zealand Poems 2005, has now put together a most interesting, and I suspect unique collection, of verse all of which has Auckland as its theme.
It includes verse from the likes of C.K.Stead, Sam Hunt, J.K.Baxter, Kevin Ireland, Iain Sharp, Michele Leggott, Louis Johnson, Albert Wendt, Glen Colquhoun, David Eggelton, Keith Sinclair, Bob Harvey, Allen Curnow , Stephanie Johnson , Vincent O'Sullivan, Hone Tuwhare and lots of others too.
I especially enjoyed this one from Bob Orr:
Container Terminal
The sun rising
above Rangitoto...
there were tracks
across the tide
I stood in sunlight
the colour of containers.
An old freighter with
a beard of rust
lay anchored
in midstream.
Gulls flew between
the masts of moored ships.
Huge wharf cranes
walked the water's edge.
Into my hand they lowered an island.
And from Kevin Ireland:
Pity about the Gulls
Walking the beach this morning
you could see yachts putting out
the white flags of their sails to sue
for peace on Earth, jaunty waves
leaning up against the horizon,
shelling out buckets of small change,
and an ocean liner, with a toothpaste
smile, sporting Rangitoto
on its beam like a cocked hat.
Pity about the gulls.
Heads down,backs hunched,
they humped the misery of the world,
drilling screams into the cliffs,
rubbing the shine off the day.
Always, some bastard has to spoil it.
An excellent and thoroughly entertaining anthology that will be especially welcomed by poetry-loving Aucklanders and ex-pat Aucklanders.
Available now from your independent bookseller or from the editor at s.bagby@xtra.co.bz
Cover art - Richard Killeen - Man, land,sea and sky.
Apology to Bob Orr and Kevin Ireland for the double spacing in their poems. Technical glitch that I cannot fix.
Posted by Beattie's Book Blog at 8:40 am