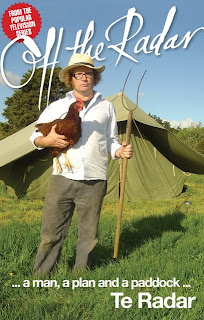 For the past few months Te Radar has entertained us on Sunday evening television with his self-deprecating, bumbling, often incompetent, but always rather heart-warming attempts at living in a sustainable manner on a block of land outside the small west Auckland village of Kaukapakapa.
He is, of course, a brilliant comic, a satirist, a naturally funny man and his television capers had me laughing out loud on many occasions.
I felt quite sad when the series came to an end last Sunday and he said goodbye to his neighbours and new found friends, as well as to his animals, especially Christmas the orphan turkey.

But now fellow fans of Te Radar’s can rest easy because next week Harper Collins are publishing his hilarious behind-the-scenes look at the TV One series starting with the lunch in a Ponsonby restaurant where he was plied with fine wine by two television producers who convinced him, a city boy through and through, to go and live on the land for eight months, through the challenging months that followed until his emergence as a better human being at the end of the series. 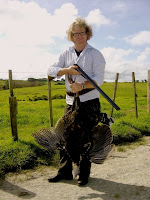 An interesting and entertaining read, a story told with a lo of humour, parts of which are actually serious,with some great photos from the TV series.
Posted by Beattie's Book Blog at 7:08 am

"a city boy through and through" ... I thought he made many references throughout the series to his childhood on a farm?

That is true but that was a long time ago and there is no question now that he is a city boy through and through.