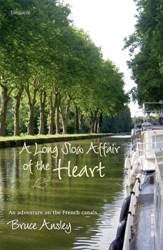 A LONG SLOW AFFAIR OF THE HEART
An adventure on the French Canals
Bruce Ansley – Longacre Press - $34.99
Bruce Ansley was one of my favourite writers at The Listener until late 2006 when he just seemed to disappear. I now know where he went – he and his wife Sally bought a canal boat, the River Queen, in Holland and sailed it through Belgium to France where they spent a year travelling all over the country..

He is an excellent writer so this book is most entertainingly written with beautiful photos to complement. I especially love the cover pic.
This book is more than just a superb travel story though, it is a memoir, a memoir of a marriage and life together, and it is remarkably candid.
Here for example is an excerpt from near the end of the book:
Adventures are not simple events. They are complex things, filled with satisfaction, and moments of complete happiness, and danger, and shards of hardship, and fright, and despair. Otherwise they would not be adventures. They would be ten days in Fiji.
I’d hoped our journey would show us, or even just hint at, the way we might spend the rest of our lives. Perhaps that was too ambitious. Perhaps too much change shifts or breaks the patterns that keep people whole. Ours worked in a way we did not expect; it narrowed the options by revealing starkly what was important and even more urgently, what was not.
Neither of us imagined for a moment that it might put our marriage in danger.
How could it? Break-ups only happened to other people, like air crashes.

I am pleased to say that Bruce and Sally are still married and back living in Christchurch and Golden Bay, both of which places play cameo roles in this most interesting of travel stories.
Posted by Beattie's Book Blog at 7:29 am

Is that where he disappeared to. He was a bloody good writer for The Listener. Let's hope he pops up there or somewhere else again soon.
Meantime I'm off to buy his book. Agree with your xomment on the cover, looks very appealing.