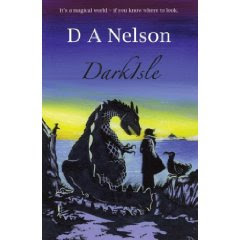 A fantasy tale inspired by a stone dragon on a beach on Scotland's west coast has been chosen by young Scottish readers as their favourite book for pre-teens.
DarkIsle by DA Nelson triumphed in the 8-11 category of the Royal Mail awards for Scottish children's books, Scotland's largest children's book award. The fast-paced first novel describes the adventures of 10-year-old Morag who, aided by a talking rat and a resourceful dodo, must race against time to save their world from an evil warlock. The trio's guide is a dragon who has been turned to stone, based on a huge sculpture by artist Roy Fitzsimmons that overlooks Irvine beach. The book is the first in a trilogy.
The Royal Mail award-winners are selected by Scottish children themselves, who vote for their favourite books from shortlists chosen by children together with a panel of experts in Scottish children's literature and education. All of the shortlisted titles were published in 2007 by authors or illustrators born or resident in Scotland. This year, the third of the awards, 9,541 young Scottish readers took part in the competition and voted. 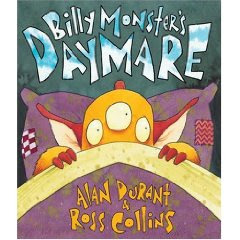 Most votes were cast in the early years category for a book in the 0-7 age group. It was won by Billy Monster's Daymare by Alan Durant and Ross Collins. Set in a topsy-turvy world where monsters are scared of children, the picture book describes how little Billy Monster can't sleep because he is suffering from horrible daymares about boys and girls.

The older readers prize (age 12-16) went to Bunker 10 by JA Henderson, a high-octane, action-packed adventure story set on a secret and remote military base peopled by super-smart teens.
Each author received £3,000 prize money at an award ceremony in Aberdeen hosted by the broadcaster Kirsty Wark and attended by hundreds of children from all over Scotland.
Posted by Beattie's Book Blog at 8:42 am