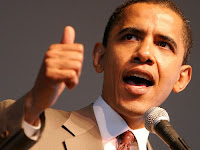 Obama hailed as books champion
The Bookseller, 25.11.08
Children's author and library campaigner Alan Gibbons has hailed Barack Obama as a books and libraries champion on the basis of a speech made by the President-elect in June 2005.
Gibbons has described the speech, made to the American Library Association annual conference, as "a brilliant rebuttal of the philistinism of all the book-burners who would make librarians redundant or close libraries".
In the speech, Obama stated, "We have to get books into our children’s hands early and often”, and described the library as "a window to a larger world, the place where we’ve always come to discover big ideas and profound concepts".
He concluded: "At the moment that we persuade a child, any child, to cross that threshold, that magic threshold into a library, we change their lives forever, for the better."
Gibbons on Obama
Posted by Beattie's Book Blog at 12:31 pm

With such strong, positive messages, these books are an immense improvement in the genre of young adult literature. They are definitely not the quality of Jane Austen or C. S. Lewis, but certainly aim higher than Harry Potter. I suggest that we allow our older teens to read them.