NEWSFLASH - 7.00PM MONDAY IN LONDON 8.00AM TUESDAY IN AUCKLAND 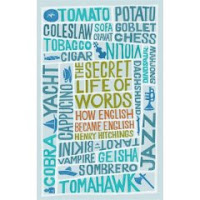 THE SECRET OF WINNING THE JOHN LLEWELLYN RHYS PRIZE 2008

Henry Hitchings has been awarded the John Llewellyn Rhys Prize 2008 for The Secret Life of Words, his engaging account of how the English language came to be.
Hitchings received a cheque for £5,000 at the ceremony in London.

The non-fiction work, published by John Murray, is a rich and lively account of the history and growth of the English language over the centuries.

Hitching’s entertaining work reveals the routes of modern English, how borrowing from other languages has seen English grow from 50,000 words a millennium ago to 700,000 words today and the surprising and amusing origins of such words as ‘admiral’, ‘landscape’, ‘marmalade’ and ‘kiosk.’

Henry Sutton, Chair of Judges comments:
“The brilliance of Hitchings' The Secret Life of Words lies in its energy, urgency and accessibility, beyond the fact that it reminds us of just how important etymology is to understanding the history of a fractured world. Written with an unnerving precision, clarity and grace, Hitchings’ scope is vast, tackling issues of communication, immigration, war, religion and community. Yet he never forgets that underpinning it all is the dynamism of English – truly a world language.
“This is a big, important book, a landmark in many ways, which will be read and enjoyed for years."

The shortlisted books were:

The shortlisted authors received a cheque for £500 each.
This year’s judges were Henry Sutton, author and Books Editor of the Daily Mirror, Joolz Denby, author and poet, and Sarah Hall, author and last year’s winner of the John Llewellyn Rhys Prize.

Biography of Henry Hitchings
Henry Hitchings was born in 1974 and lives in London. He was educated at the universities of Oxford and London, completing his PhD on Samuel Johnson. His first book, Dr Johnson's Dictionary, earned widespread praise and won the Modern Language Association's prize for the best work by an independent scholar in 2005. The Secret Life of Words continues his interest in language and cultural history, and he is currently working on a third book in this area. He has contributed to many newspapers and magazines, including the Financial Times, The Times Literary Supplement and the Guardian.

About the John Llewellyn Rhys Prize
The prize was founded 66 years ago in honour of the writer John Llewellyn Rhys, who was killed in action in World War II. His young wife, also a writer, began the award to honour and celebrate his life. Past winners of the award include VS Naipaul, Dan Jacobson, Elizabeth Jane Howard, Angela Carter, Margaret Drabble, David Hare, AL Kennedy, Andrew Motion, William Boyd, AN Wilson and Charlotte Mendelson.
Last year’s winner was Sarah Hall for her novel The Carhullan Army (Faber).

Link here to read the review of The Secret Life of Words by Gordon McLauchlan on my blog in June. And here to read a review in The Independent in May.
Posted by Beattie's Book Blog at 6:27 am