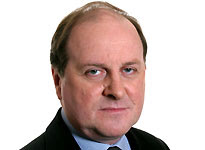 James Naughtie to Chair The Man Booker Prize for Fiction 2009

James Naughtie, one of the country’s best-known broadcasters, is to be the Chair of the judges for the Man Booker Prize for Fiction 2009.
Ion Trewin, Literary Director, comments: ‘I am delighted that Jim will be chairing the judges for the 2009 prize. As host of Radio 4's monthly Book Club he displays his passion for fiction, and as presenter of Today on BBC Radio 4 he is no stranger to fervent debate, even to controversy - both admirable qualifications for the role.’

During his career, Naughtie has anchored BBC radio coverage of British and American presidential elections and has written and introduced numerous documentaries and programmes for BBC Radio and television.

As an author, he has written two books on contemporary politics, The Rivals – The Story of a Political Marriage, and The Accidental American – Tony Blair and the Presidency. His book, The Making of Music, based on his Radio 4 series, an account of the Western classical tradition, was published in paperback this year.
James is connected with a number of arts organisations and charities, is a member of the advisory board of the Edinburgh International Festival, a patron of the Prince of Wales Foundation for Children and the Arts, a trustee of the Classical Opera Company, a trustee of the Art Fund Prize for museums and galleries and a patron of Southbank Sinfonia. In 2008 he was appointed Chancellor of the University of Stirling. He is also a former chairman of judges of the Samuel Johnson Prize for Non-fiction.

The full panel of judges will be announced in December.
Posted by Beattie's Book Blog at 6:23 am

BBC 4's Book Club can be listened to online, and is always worth listening to. As is Mariella Frostrup's weekly Open Book, which concentrates mainly on author interviews.

All shows back to August 2007 can be listened to from the below link: