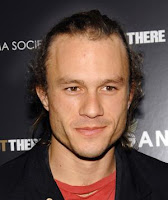 Heath Ledger's family and friends have described as grossly inaccurate a book which suggests he was mentally ill.
The Hollywood star (pic left AP) was found dead in a New York apartment from an accidental drug overdose on January 22 this year.
The Ledgers issued a statement on Friday to distance his immediate family, close friends and associates from Janet Fife-Yeomans' book Heath: A Family's Tale, published by Murdoch Books.
The book suggests Ledger may have suffered from bipolar disorder just as his estranged uncle Haydn Ledger does, who was interviewed for the book.
"The book contains gross inaccuracies, false allegations (against Kim Ledger) and many incorrect and unsubstantiated comments about Heath in his youth, provided by estranged family members and some people who had little to do with Heath's life," the Ledger family statement said on Friday.
Read the complete story at the SMH online.
Posted by Beattie's Book Blog at 7:22 am