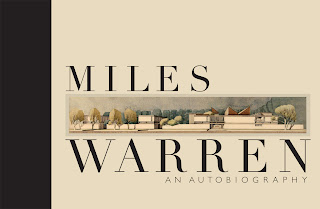 Sir Miles Warren is arguably New Zealand most noted and best-known architect of the past 50 years. He is also famously shy, a very private person, and so it is both remarkable and pleasing that he has written this autobiography.

Sir Miles was a founding partner of Warren and Mahoney Architects and is one of New Zealand’s foremost designers. In this memoir he recounts an illustrious career in residential and commercial architecture, revealing the processes behind design, construction, client relationships and contractor negotiations.
From Christ’s College and the Christchurch Town Hall, to Parliament House in Wellington and the New Zealand High Commission in India, Miles Warren’s designs are found throughout New Zealand and abroad. Over the years, Sir Miles has kept a record in watercolour of his many projects. In this book these superbly executed perspectives are brought together for the first time.
The publishers have kindly allowed The Bookman to reproduce some of these wonderful illustrations and they appear below, although I hasten to add I cannot do justice to them and they obvioulsy are best seen in the book..
Sir Miles makes the point that his generation was probably the last to be trained in the techniques of watercolour. Today he says architects’ designs are quickly and accurately produced in three dimensions, in full colour, on computers, and the traditional craft of watercolours made by architects is dying. When you look at the many superb watercolous in this stunning book you realise what we are losing. 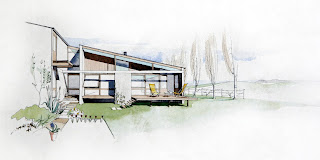 Filled with delightfully-told anecdotes, this is the story not only of a celebrated architect, but of a New Zealander whose career took him to many parts of the world during the era of travel by sea. Written with humour and feeling, this autobiography will appeal to a general readership as well as the architecture enthusiasts among us, and Sir Miles Warren’s many admirers. It is a handsome book in landscape format which is ideal to best show the many fine illustrations.

Illustration left - Williams Court in Christ's College, dropping down to the Avon River, with the sports hall on the left and the stepped science block on the right. 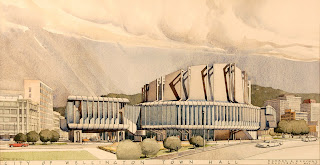 Image right shows the first perpective of the Michael Fowler Centre.
Posted by Beattie's Book Blog at 6:43 am