New Zealand’s Parliamentary Library celebrates its 150th anniversary in 2008. Founded within a few years of the start of representative government in New Zealand in 1854, it is a vital part of our democracy.
Over the years the library has changed out of all recognition from its beginnings in a tiny collection of reference works in a one-room cottage. In the late nineteenth century it became New Zealand’s de facto national library, in a magnificent Gothic building.
Today it is an ‘electronic powerhouse’ providing information to Parliament. Over 150 years the library has faithfully served Parliament, responding to MPs’ needs for information, enlightenment, recreation and solace.
I was especially interested to read the caption with a photograph of Minister of Education Peter Fraser whom it says was an inveterate user of the General Assembly Library who saw the potential of a national library system and supported moves towards this end in the latter half of the 1930’s.
In another long caption alongside Warren Freer, member of Parliament 1947-81, it says in part that Freer was a library assistant while at Auckland Grammar School and was a keen supporter of the library. He served for some 26 years on the Library Committee and 12 years as a Trustee of the National Library.
These days the Parliamentary Library continues to give Parliament rapid, efficient and reliable service. Together with its wider national responsibilities, the library continues to make a vital contribution to New Zealand’s political and cultural heritage. This is a handsome, beautifully illustrated book providing a most interesting history of one of our major cultural treasures and it should be represented in multiple copies in every public library and also on the shelves of all New Zealand bibliophiles, and of course present and former staff will all want a copy. 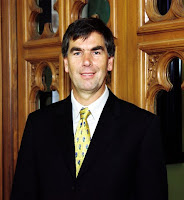 Author Dr John E. Martin is the Parliamentary Historian.
He is involved in a range of activities associated with the History and Heritage programme within Parliament, researching and writing historical material, recording oral histories, collecting relevant history and heritage items and preparing displays.
He wrote The House: New Zealand’s House of Representatives 1854–2004 for the 150th anniversary of Parliament in New Zealand and has published widely on our political and social history.
John Martin is superbly qualified to have written this history and he has done a grand job. I offer him and the publishers my warm congratulations. I am truly delighted to have Parliament's Library on my bookshelf.
Posted by Beattie's Book Blog at 12:23 pm