THE LITTLE PUBLISHER THAT GREW
In my piece on New Zealand boutique publishers for the Herald on Sunday back in August I suggested that it would be stretching it to call Longacre Press a boutique publisher for much longer and now that I look over their 2008 publishing programme my view has been confirmed.
Have a look at this:
The Business of Documentary Filmmaking: A Practical Guide for Emerging NZ Filmmakers
Lloyd Spencer Davis and Claudia Babirat - 34.99
Digging for Spain – memoir
Penelope Todd 29.99
March to the Sound of the Guns – novel
Ray Grover 34.99
Shadow of the Mountain – young adult novel
Anna MacKenzie - 18.99

The 10pm Question – novel (contender for cover of the year I reckon)
Kate De Goldi - 29.99
A Long Slow Affair of the Heart: An Adventure on the French Canals
Bruce Ansley - 34.99
Your Last Fencepost: Succession and Retirement Planning for New Zealand Farmers
Joan Baker - 29.99

High Country Lark: An Invitation to Paradise
Neville Peat - 44.99
Painting out the Past: The Life and Art of Patricia France
Richard Donald - 44.99 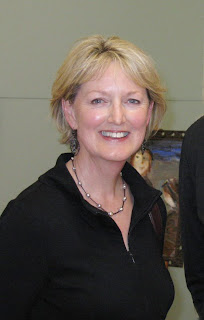 Now this is an impressive, broadly based, critically acclaimed publishing programme from a confident publishing house that now probably sits in the mid-range when it comes to size of list.
You have to hand it to Barbara Larson and her small all-women team (4 full time 4 part time) at Longacre Press. Without the financial clout and stability of the big multinational players like Random House, Penguin, and Harper Collins they nevertheless manage to pull together an impressive programme with a distinctly southern voice.
Longacre was founded in 1994 so which makes them 14 years old. It was the stunning Timeless Land by Grahame Sydney, BrianTurner, and Owen Marshall that really established them as a force to be reckoned within the book publishing world. I have a copy of that book, presented to me in fact by Longacre at the time I stepped down from Scholastic. I value it greatly. Three great talents in Sydney, Turner and Marshall put together in a handsome and memorable book -a fine piece of publishing.
The company has changed shape over the years: the list has grown to over 20 titles per year. Four years ago they purchased the Shoal Bay list.
Their philosophy is to publish those books that excite them and that they think they can publish successfully; they publish writers who have an individual voice and a story to tell. They allow for the distinctively southern voice. They are especially excited by the very high standard of young adult fiction coming their way and have carved out a leadership role in this genre in New Zealand.
There is no doubt that they are contributing to a literary tradition and to public debate and Barbara and her team should feel proud about that.
Longacre Press
PO Box 5340
Dunedin
Phone: 03-477 2911
Website : http://www.longacre.co.nz/
Posted by Beattie's Book Blog at 1:37 pm