From The Times
November 21, 2008
Exclusive interview with Art Spiegelman
Tom Gatti talks to the Pulizer-winning creator of Maus

DESPITE THE LACK of whiskers, upright ears and fleshy tail, the real-life Art Spiegelman looks remarkably like his self-portraits in Maus - the groundbreaking comic-book memoir of his father's experiences in Auschwitz, in which Jews are mice and Nazis cats.
The waistcoat, the permanent cigarette, the thick, expressive eyebrows - they're all present and correct, as Spiegelman scuttles around his Manhattan studio (in a not entirely un-mouselike way) attempting simultaneously to have his picture taken, field phone calls, and tell me about his new book, Breakdowns: Portrait of the Artist as a Young %@&*!. 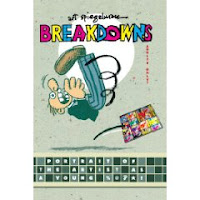 Ashtrays overflow with pencil-shavings, back issues of Tales of the Incredible and Humbug line the shelves, and early newspaper “funnies” cover the walls. It's the lair of a man who has devoted his life's work to comics: reading, analysing, editing and making.

Read the full intervew at The Times online.
Posted by Beattie's Book Blog at 7:51 am