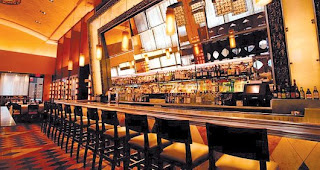 Though prayers this week should undoubtedly be with the editors of Houghton Mifflin Harcourt, who were told a few days ago by their CEO that they can no longer afford to acquire new books, it should not go unremarked that editors at other houses are being forced to give up something almost as essential: lunch!
Though many agents say they’re still being wined and dined several times a week, a number of the publishers who are paying for it agree that it should no longer be part of an editor’s job description to regularly eat in fancy restaurants on the company tab. Forget those two martinis, we’re talking about food—as in, no more of it.
“All over town, people are saying, ‘Cut back,’ and that’s certainly what we’re saying,” said HarperCollins publisher Jonathan Burnham, who stunned agents last spring when he asked his staff in a memo to eliminate their lunch expenses for the entire month of March. “I think it’s mutual—I think agents expect to be taken out less. It’s not like they’re calling and no one’s returning their calls. It’s just that the idea of sitting down for a lunch that costs $130 for two, or even $80 for two, seems beside the point.”
At Collins, Harper’s sister division at 10 East 53rd Street, editors have been asked to scale back on their expenses, and at Random House, several sources confirmed, some supervisors were recently given guidelines indicating how much employees should tip and which restaurants near the company’s midtown headquarters are thrifty enough to do business in. While the guidelines were advisory, the message was clear.
“I think some lunching might still be going on, but I think one does that at one’s own peril,” said a senior editor who works at one of Random House’s varsity league imprints. “I think it’s generally understood that it is not the smartest way to show your individuality.”
Stuart Applebaum, Random House’s corporate spokesman, denied that there had been any top-down mandate to cut back on expenses, but acknowledged that the atmosphere in the building was one of frugality.
“We’re all very cost- and expenses-conscious these days throughout book publishing, and probably throughout most cultural businesses in the city, if not nationwide,” Mr. Applebaum said. “Prudent leadership should be suggesting that if your expensed lunch isn’t absolutely mandatory now, why not postpone it, or eat in the cafeteria?”
By “cafeteria,” Mr. Applebaum meant the company-subsidized mess hall on the second floor of Random’s headquarters at 1745 Broadway. “The cafeteria works for me,” he said. “I always like the turkey sandwiches I get down there.” Then again, he noted: “You’re talking to a guy who most every day eats lunch at his desk.”
The full story online at The New York Observer
Posted by Beattie's Book Blog at 6:49 am