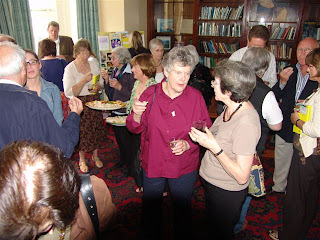 Guests at the the book launch of David McGill's The Communion of the Easter Bun-Rabbit are Jenny Pattrick perhaps explaining what plate she brought along to Win Jackson, while to her left Robyn White hands around the fast disappearing dainty ham and mustard sandwiches and cream cheese packed with the author's garden herbs of nasturtiums, chives, mint and basil mint. To Jenny and Win's right we have Grant Tilly facing towards the top of the head of Karl du Fresne, with Rex Nicholls and Mayor Kerry Prendergast, the latter encouragingly clutching a copy of my book she purchased. Behind Jenny is my accoutnant Alison Morgan, invisible, with her friend, and next to my partner Robyn, just behind, are Pat Lissienko, widow of Ikar, who is prominent in a latter chapter, and Frances Forsyth, then back to camera Tina facing husband Rick de Bes, with my daughter's flatmate Jess talking to head of Laughton Pattrick. Foreground could be Inna Lissienko crouching over: her Russian cabbage pie is grouse.

The launch was held on Saturday afternoon in the idyllic surroundings for a book launch of the book-lined, dark-panelled drawing room of Turnbull House, the sturdy two-storey brick heritage house opposite the Beehive that was home of the eponymous Alexander who founded our major national library.

Traditional Kiwi snacks in fitting with David McGill's food memoirs spanning 65 years included pink lamingtons, asparagus rolls, devils on horseback, cheese straws and cheese busters and cousin Jenny Pattrick's serving of her Aunt Freda's famous bran muffins, all of which disappeared down 40 or so gullets in about the time it takes to say the title and its sub-heading 'The Food Lives of a Kiwi Here and There'. 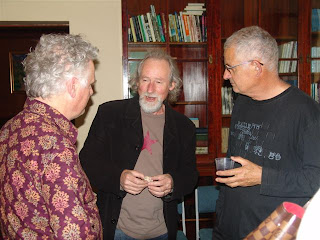 David Burton talks to Burton Silver talks to David McGill at the Bun Rabbit book launch. This combo confusion of Burtons and Davids goes way back. Bun Rabbit author David McGill played squash with cartoonist/author Burton Silver in London in the late 60s, the start of the period food critic/reviewer/author David Burton identified in his guest speech as the mid-60s BOAC jet arriving here to a haka from the Maori Concert Party, the moment when Kiwi eating habits changed forever.

After that Kiwis got out to see the world and sample other cultures' foods and bring them back to liven up a dullboot food scene. If not for that jet travel, David Burton said, we might still be the insulated little lot he recalls in the Jolly Frog restaurant in Wellington asking for their steak tartare well done, or the Hi Diddle Griddle incident in Auckland of tipping the finger bowl liquid over the the chicken in a basket.
He said you could see the effect of that travel by those who sent apologies to the book launch, such as Fiona Kidman in Vietnam and Roger Hall climbing the Pyramid and Bob and Galya Brockie in Oz.
David Burton referenced Galya as an example of what was on offer in the book. Long-time friend Galya introduced the author to pilemni and piroshki, a Ukrainian immigrant who socialised with Lithuanian immigrant Harry Seresin, singing European folk songs at the venues where Harry acted as godfather of Kiwi cafe culture. Harry founded the revolutionary notion of food and theatre with Graham Kerr's crepes suzettes to introduce locals to our first professional theatre, Downstage.
David Burton said his favourite chapter was on the author's close friendship with Harry Seresin, who was godfather to the author's daughter. In this book mixing personal and social evolution of Kiwi eating habits, the author's daughter Kate was handing around traditional Kiwi tucker to the guests who included the cousins on the cover photograph she took, Dinah Priestley and Audrey Patchett, who identify the author's inherited inclination to bake bread from the age of five. 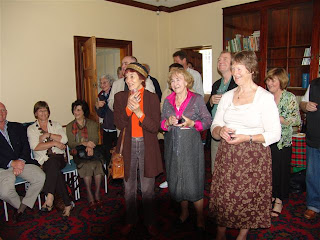 Cover subjects Dinah Priestley, left with exotic hat, and Audrey Patchett. Inna again is seated, next to Kerry and Rex, on the left, with behind her Pat Lissienko standing, Tony Simpson behind Dinah, Karl behind Audrey, Ken Hales between Audrey and Frances Forsyth, next to Robyn. The single jeaned invisible man may be Grant Tilly.
As David McGill suggested "A Welligentsia scrum, eh?"
They are among the guests enjoying the launch speech in which author David McGill strayed into reminiscences of other launches, such as the occasion at the Wellington Railway Station nearby when Richard Prebble as Minister of Rail was launching his rail journey in praise of the real people you met by rail as opposed to Parliament, only a matter of weeks before the Minister practically put himself as well as many rail folk out of a job.

The food memoirs include revisiting that rail journey and the company of guards identifying the best possies for rock oysters, paua and figs.

A great fun launch, seemed so approriate for a great fun book.
Read my earlier review.

Author/publisher David McGill is offering a free copy of his book, The Communion of the Easter-Bun Rabbit to whomever can name the most people unnamed at the launch on this blog.
Posted by Beattie's Book Blog at 3:37 pm