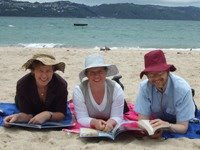 The judges for the 2009 New Zealand Post Book Awards have positioned their deck chairs, turned off their phones and slapped on the sunscreen as they embark on what will be a wonderful summer of reading. Writer and former children’s librarian Bill Nagelkerke, Children’s Literature Consultant Rosemary Tisdall, and children’s editor and career bookseller Jenni Keestra, are the three people who have been chosen to judge the Awards in 2009.
Pic shows L-R: Rosemary Tisdall, Jenni Keestra, Bill Nagelkerke
In search of the very best, they will each read and assess over 130 books for Children and Young Adults published in New Zealand in 2008. From picture books by iconic authors and illustrators, to exciting junior and young adult fiction and a huge variety of non-fiction titles, the judges will read them all.
Judges’ convenor, Bill Nagelkerke says “Books are an incredibly important part of childhood.”
“Those dog-eared pages of much-loved favourites become a part of who we are, and often shape our view of the world.
”In the past it has been Hairy Maclary’s curious adventures, Maui’s heroic acts, and Margaret Mahy’s stories about tentative steps into teens, that have taken on a life of their own in the imaginations of young readers. We’re looking for stories that the current generation of young New Zealanders, and their parents, will fall in love with.”
Jenni Keestra says “the Awards promote excellence in children's literature.
”It’s vital that we celebrate and acknowledge great writing, illustration and publishing in New Zealand,” says judge and bookseller Jenni Keestra. “The standard of publishing here is very high, and these awards are a real boost for authors and publishers, resulting in many of our award-winning books becoming extremely popular, both at home and internationally.”
Rosemary Tisdall is passionate about books that encourage young people to read.
“A really good book will resonate with a child, and either transport them to another world, or make them see their own world differently. The use of language, storyline, illustration, factual information and an opportunity to use their own imagination are the key ingredients we’ll be looking for as we read all these books over summer.”The 2009 New Zealand Post Book Awards finalists will be announced on 3 March, 2009, and winners announced at an Awards Ceremony in Auckland on 20 May, 2009. Children and teenagers will also have the opportunity to vote for their favourite book, selecting from the finalist titles, for the popular Children’s Choice Award.
Voting begins online at http://www.nzpostbookawards.co.nz/, and via voting cards available in bookshops and libraries nationwide, when the finalists are announced on 3 March, 2009.
New Zealand Post has been a steadfast sponsor of the New Zealand Post Book Awards for Children and Young Adults for more than 10 years.
Their partnership has seen the awards flourish, growing from strength to strength over the last decade. New Zealand Post’s support of these awards reflects their deep commitment to promoting literacy and literature throughout the country.
Working closely with Booksellers New Zealand, New Zealand Post and other dedicated segments of the community actively encourage New Zealand children to read and enjoy books. For those with limited access to new works, New Zealand Post also purchases and distributes books by the New Zealand Post Book Awards finalists by supporting the Books in Homes programme each year.
The New Zealand Post Book Awards are also supported by Creative New Zealand and Book Tokens (NZ) Ltd and are administered by Booksellers New Zealand.
Posted by Beattie's Book Blog at 3:49 pm