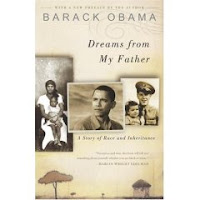 Obama cornered by Canongate
Charlotte Higgins guardian.co.uk, Wednesday November 26 2008
Who are the most ardent fans of Barack Obama in Britain? The people at Canongate, the Edinburgh-based publishers. Why? Because they were canny enough to buy Obama's books Dreams from My Father and The Audacity of Hope, way back at the start of 2007, when Obama was nought but an unlikely outsider for the presidency. And, says Canongate boss Jamie Byng, they got them for "pretty modest five-figure" sums. Bless Byng - you'd think he was the one who'd just run for election: "It's been an amazing journey for us," he says.
Last week, Dreams sold 24,000 copies; and Audacity 16,000.
Posted by Beattie's Book Blog at 2:36 pm