PAINTING OUT THE PAST
The life and art of Patricia France
Longacre Press - $44.99 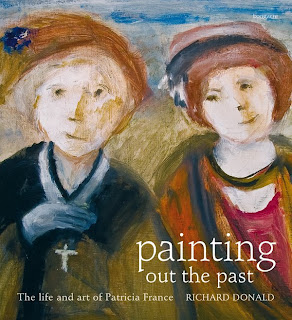 A very successful launch for Richard Donald’s new book Painting out the Past – The life and art of Patricia France, was held at the Moray Gallery in Dunedin last week.

Patricia France, who began her painting career later in life, was most at home in the company of people involved in the arts. She corresponded regularly with McCahon and Woollaston, exhibited with Ralph Hotere, and acted as patron to many young artists who visited her gracious Dunedin home.

Twenty of Patricia's paintings were brought in for the one-night-only show to mark the launch while in one corner Patricia’s stool, easel and paint pot, provided by artist John Z. Robinson were displayed. The book was launched by Michael Harlow, and Brian Turner who was a close friend of Patricia’s paid a heartfelt tribute.
All agreed that Patricia, who was wonderfully hospitable would have enjoyed the occasion immensely. A retrospective exhibition of Patricia France’s work will tour in New Zealand next year.
Painting Out the Past showcases the artist’s captivating and impressionistic paintings, mostly featuring flowers or people, along with photographs and extracts from her extensive correspondence.

Author Richard Donald, Emeritus Professor at the University of Otago has made a fine job of interviewing many of Patricia France’s many friends and colleagues and linking her papers and correspondence into a readable and entertaining book. 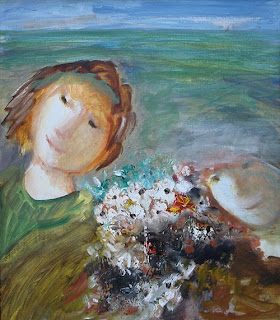 Her many friends must be delighted to see this book published in such an attractive and appealing manner.

And may The Bookman add that with its profuse colour illustrations, high quality paper, and superb design, as well as being printed in New Zealand rather than China, the book is a bargain at $44.99.
Posted by Beattie's Book Blog at 3:22 pm