One of the world’s leading publishers of books on the visual arts, culture and creativity, Phaidon Press, has published a bright and lively new series of six board books for children called Let’s Play Games!
(April 2011, NZ$12.95 each, Ages 2 - 4). 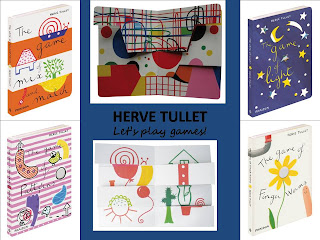 Created by the acclaimed storyteller and master illustrator Hervé Tullet (b.1958, Paris), known in France as ‘The Prince of pre-school books’, Let’s Play Games! inspires children to think imaginatively, independently and creatively; when children close their eyes they can follow the “magic line” on a surprising journey of touch; if they paint a face on their finger, they can enter the imaginary world of the finger worms; and at bedtime with the help of a torch they can even see fish swim across the walls and flowers bloom!

THE GAME OF FINGER WORMS introduces children to a vivid imaginary world, where their own hands are the star of the story, as they discover the world of the finger worms. Featuring die cut holes on every page, young children and their parents are encouraged to poke their fingers through the holes to see if the finger worms are “hiding in your slice of cake,” or “swimming at the bottom of a lake!”

THE GAME OF LET’S GO! asks children to close their eyes, place their finger on a “magic line” and let their imaginations take them on a journey through the pages of the book. Featuring a tactile, fuzzy green line that runs continuously throughout the book, children must focus their minds to navigate through the cleverly die-cut pages as they tell the story of what they are tracing with their finger out loud.

THE GAME OF LIGHT is the perfect way to end a child’s busy day. Using a torch, children project patterns, produced by the book’s imaginative die cutting, on their darkened bedroom walls. Children create a magical nighttime world in which “fish swim across the walls” and “faces light up the room!”

THE GAME OF MIX AND MATCH encourages children to use their imagination to create a whole menagerie of unusual objects. What happens when you mix an airplane with an elephant? Or a heart with a lemon? Children are limited only by their own minds as they turn die-cut flaps and manipulate over fifty pictures to create imaginative new objects.

THE GAME OF MIX-UP ART features seven “beautiful paintings, ready for you to mix up.” Each page of the book is die cut into three flaps so that children can turn them individually and create their own new works of art with “squiggles, spots, squares and shapes of all kinds.” The independently functioning flaps allow children to create works of art that are as unique as their own personalities.

THE GAME OF PATTERNS invites little readers to find a friend and play the game of “spot the difference.” Beautifully illustrated with colourful abstractions, children work to spot the subtle differences between the images presented on opposing pages. A smile becomes a frown, an angry robot loses a tooth, an arrow points in the opposite direction. With puzzles becoming progressively more difficult, and no answers presented, children will delight in the challenge of revisiting this book and spotting new differences again and again.

About the Author/ Illustrator

Hervé Tullet (b. 1958) has been an art director, a magazine illustrator, and for the past 15 years, one of the world’s most innovative creators of books for children. The award-winning artist and illustrator for The New Yorker, has been called the “Prince of pre-school books” in France. He lives with his two sons and daughter in Paris.
Posted by Beattie's Book Blog at 6:35 am