Michelle Goldberg is a journalist based in New York. She is the author of The New York Times bestseller Kingdom Coming: The Rise of Christian Nationalism and The Means of Reproduction: Sex, Power and the Future of the World, winner of the 2008 J. Anthony Lukas Work-in-Progress Award and the Ernesta Drinker Ballard Book Prize. Goldberg's work has appeared in Glamour, Rolling Stone, The Nation, New York magazine, The Guardian (UK) and The New Republic. Her third book, about the world-traveling adventuress, actress and yoga evangelist Indra Devi, will be published by Knopf in 201
Once a trademark of the fringe right, Obama birth conspiracies are dominating the GOP’s discourse—and now, Amazon’s bestseller list. Michelle Goldberg on why that’s good news for Democrats.

There probably are some politicians who are very nervous about the fact that Jerome Corsi’s new book, Where's the Birth Certificate? The Case that Barack Obama is not Eligible to be President has already rocketed to the top spot on Amazon weeks before its publication date. None of them are Democrats. Throughout the last two years, the conservative movement has mainstreamed once-fringe elements, encouraging ever more outré speculation about our president and his origins. Now the Republican Party has a birther problem it can’t control. 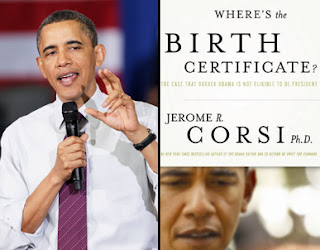 The list of prominent conservatives who have winked at birtherism is long. Earlier this month, Rush Limbaugh said, “We’ve got somebody about whom there are legitimate citizenship questions here, serving as president.” In March, Mike Huckabee said Obama grew up in Kenya and thus probably sympathized with the Mau Mau Rebellion against the British, though he later tried to pretend that he’d simply gotten Kenya and Indonesia mixed up. Sean Hannity has continually raised questions about Obama’s birth certificate. Michele Bachmann said that, running for president, “I think the first thing I would do in the first debate is offer my birth certificate so we can get that off the table.”

And, not surprisingly, many conservatives have taken their leaders at their word. A New York Times/CBS poll released Thursday shows that only 32 percent of Republican voters believe Obama was born in the United States. The numbers are even worse in Iowa, a hugely important state in the primaries. There, a Public Policy Polling survey recently found that only 26 percent of Republicans believe that the president was born in this country; 48 percent say he wasn’t, and the remaining 26 percent aren’t sure.