Agricultural Heritage, A History of the Auckland Agricultural and Pastoral Association, 1843-2010, by Hugh Stringleman. 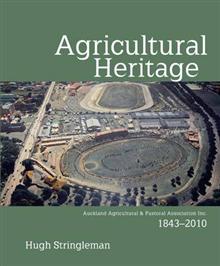 The Auckland A & P Association, founded in 1843, is one of the oldest organisations of its type in the country, and for more than a century its Easter Show has been a central event on the city’s annual calendar.

Now that Auckland is so densely urban it is easy to forget its roots lie as deeply in the soil as any other part of New Zealand. Stringleman, who was helped in this commissioned project by the late Graeme Hunt, starts with stories of the horticultural activities of the Colonial Surgeon, Dr John Johnson, who was gardening in what is now the inner city within weeks of William Hobson’s decision on just where the new New Zealand capital would be situated.
The earliest settlers like Johnson and John Logan Campbell were excited to get two crops a year from the volcanic soil, helped as it was by the warm rain that fell pretty evenly through the seasons.

The large numbers of British troops garrisoned here for thirty years from the 1840s were fed by farms in Newmarket, Epsom, Remuera and Ellerslie as well as by enthusiastic nearby Maori farmers.

It is a good story, well told by a veteran agricultural journalist who is shrewd and experienced enough to know that even in a formal commemorative books people rather than events make good reading.

Although Auckland was a bustling commercial centre from its earliest days and never as wholly devoted to agriculture in its colonial era as most other New Zealand centres, it was always fundamentally supported by farming. And when dairying became export-orientated the regional farmers soon exploited the fact that South Auckland, the Waikato and Bay of Plenty are among the best grass-growing places in the world. Thus, people central to farming in the region and in the country were also influential figures in the history of Auckland, amond them a long time Prime Minister William Massey.

Footnote:
Gordon McLauchlan is an Auckland-based writer & commentator, and an occasional reviewer on this blog.
Posted by Beattie's Book Blog at 2:31 am